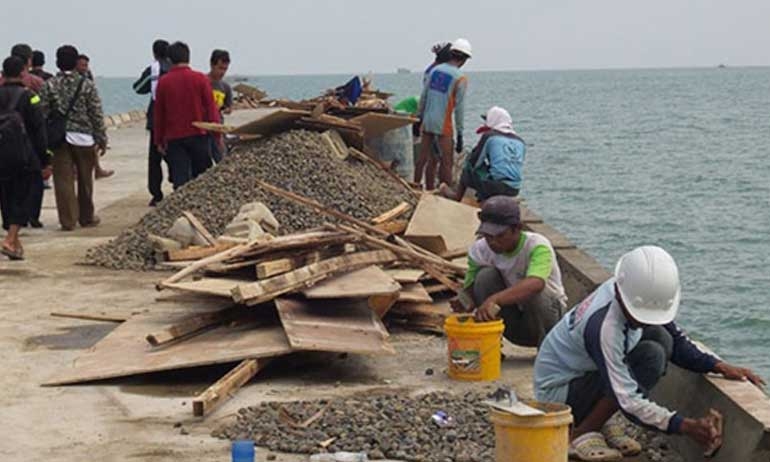 Transportation Minister Budi Karya Sumadi said Monday that the Japan-backed Patimban seaport is expected to be the logistic hub for goods shipped to and from eastern Indonesia to Java Island, complementing the busy Tanjung Priok Port in Jakarta. Tanjung Priok Port will then primarily handle shipments that are bound and coming from the western part of the country, he said. “We are optimistic that the seaports will complement each other,” he said during an online webinar held by news agency Liputan6.

The ministry also expects both ports to handle goods from different industrial zones located in western Java. Industries in Bekasi regency, Tangerang city and Banten province will be directed to use Tanjung Priok seaport, while those in Karawang regency, which hosts the country’s largest automotive factories, will be directed to Patimban seaport for outbound logistics, he said. “It takes around four hours for automotive products from Karawang to reach Tanjung Priok seaport and only an hour to reach Patimban seaport,” he said. Patimban seaport is one of the government’s national strategic projects, funded by an official development assistance (ODA) loan from the Japanese government of Rp 14.2 trillion (US$1 billion) for the first phase of development. During the first phase, the seaport will serve 3.75 million twenty-foot equivalent units (TEUs) and accommodate 600,000 complete built-up (CBU) vehicles. Meanwhile, in the second phase, Patimban's capacity will increase to 5.5 million TEUs and it is expected to reach its final capacity of 7.5 million TEUs in phase three, which is to be completed by 2027.

Indonesian Logistics Association (ALI) chairperson Zaldy Ilham Masita told The Jakarta Post on Tuesday that the separated distribution plan would not work as the two ports were in close proximity. “I don’t think the minister completely understands the sea freight flow. It’s not angkot [public minivan] routes, which could easily be dictated,” he said. He added that dividing domestic shipment for eastern and western Indonesia between the two ports would only increase costs for shipowners. “On the contrary, dividing sea freight between the two ports would only increase costs as the ship load factor could not reach economic volume and there would be an additional cost to go from Tanjung Priok to Patimban,” he said. Meanwhile, consulting firm Supply Chain Indonesia (SCI) chairman Setijadi said the two seaports’ operation may increase logistics efficiency for import-export activities.

Patimban seaport could ease product flow from industrial zones in West Java and reduce the industries’ dependency on Tanjung Priok Port, he told the Post on Tuesday. “Patimban seaport will become strategic for industries in West Java and could potentially divert import-export volume from Tanjung Priok. Besides reducing dependency on Tanjung Priok, Patimban will also create healthy competition between seaports,” he said via text message. According to SCI’s data, around 79 percent of exported products and 84 percent imported products that go through Tanjung Priok seaport are associated with industrial activities located in West Java. Furthermore, more than half of the national export-import volume, at around 65 percent, also go through Tanjung Priok.

To maximize Patimban seaport potential Setijadi said the government must also ensure the port’s accessibility by building toll roads and rail track connecting the port with industrial centers. “The seaport must be integrated with the industrial hinterland, either through highways or toll roads, because road transportation contributes by up to 50 percent of all logistics cost,” he said. The Public Works and Housing Ministry announced on Nov. 9 that it had finished building the access road to Patimban from Java's northern coast (Pantura). The road, which spans 8.2 kilometers, cost Rp 1.2 trillion. Minister Basuki Hadimuljono also said Sunday that the government aimed to open tender on nine toll road sections by year-end, including an additional Patimban seaport access toll road. According to the ministry’s data, the Patimban access toll road will stretch 37.7 km and connect Patimban with Cikopo-Palimanan toll road, which crosses through the industrial zones in the northern part of Java. It is estimated to require Rp 6.36 trillion.