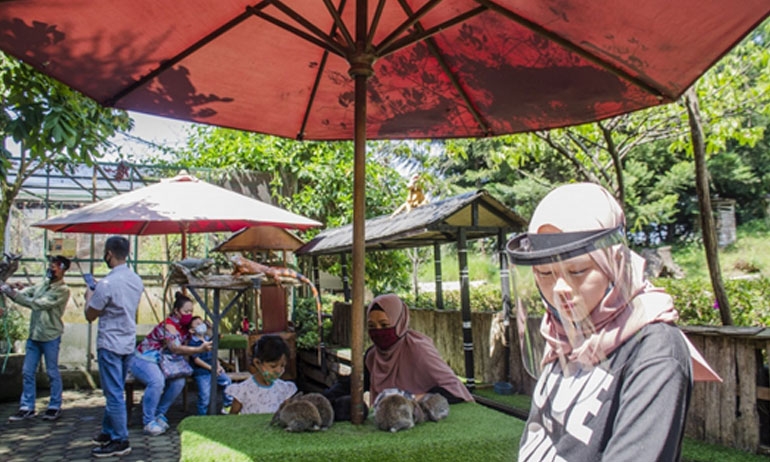 The Tourism and Creative Economy Ministry is planning to prioritize four regions for its stimulus and promotion program aimed at recovering the pandemic-battered tourism industry, officials have said. According to the ministry’s data, the four priority regions are Batam and Bintan Island in Riau Islands, Bandung and Cirebon city in West Java, Central Java and the agglomeration of Yogyakarta, Surakarta and Semarang (Joglosemar) and Bali. The ministry’s strategic management director Wawan Rusiawan said Wednesday that the government aimed to actively promote the destinations to domestic travelers.

“We are focusing on four main destinations that are well-known and frequently visited by tourists during the rebound period,” he said in a webinar held by the ministry. He added that the ministry was also striving to balance its rebound strategy between spurring demand and maintaining supply of tourism sector services, by providing stimulus incentives to both tourism business owners and travelers. The COVID-19 health emergency has devastated the tourist industry, amid the imposition of large-scale social restrictions (PSBB) in several regions and border closures to prevent virus transmission. The pandemic pressure had wiped an estimated Rp 85 trillion (US$5.8 billion) from Indonesia’s tourist revenue as of July, with losses of around Rp 70 trillion recorded by the hotel and restaurant sector, according to data provided by the Indonesian Hotel and Restaurant Association (PHRI).

Furthermore, Tourism Ministry data show that more than 2,000 hotels and 500 restaurants have temporarily closed, while more than 2.1 million small and medium businesses have taken the brunt of plummeting demand and revenue due to the health crisis. During the rebound process, Wawan said the government would focus on boosting domestic tourist demand by rolling out travel package discounts to Indonesian nationals, particularly the upper-middle class and millennial segment. According to Wawan’s presentation, the ministry rolled out Rp 2.4 trillion worth of tourism discount packages for Indonesian nationals between October and December, which is expected to have a multiplier effect on the economy worth as much as Rp 28.64 trillion. “We have implemented programs focusing on health protocols and security, travel incentives, meeting, incentive convention and exhibition [MICE] event optimization and incentives, to boost residents’ purchasing power,” he said. The number of foreign tourists is predicted to remain low for years to come, Wawan stated. Between January and September this year, the number of foreign visits dipped 70.57 percent to 3.56 million visitors from the same period last year, according to Statistics Indonesia (BPS) data. Wawan said the annual foreign tourist number was projected to significantly decline by around 12 million to 13 million people this year from a total of 16.11 million visitors in 2019. The drop would cause a potential foreign exchange loss of up to $15.8 billion by year-end, according to the ministry’s estimates. The ministry has also rolled out relief grants worth Rp 3.3 trillion to 101 selected cities and regencies, located in regions where hotel and restaurant tax accounted for at least 15 percent of the locally generated income (PAD) during the 2019 fiscal year.

Businesses in the selected regions would receive 70 percent of the given grants, while the remaining 30 percent would be given to local administrations. During the discussion, PHRI secretary-general Maulana Yusran urged the government to focus on the business travel segment rather than leisure travelers when formulating policies. This is particularly to help accommodation businesses, as many hotels are facing huge losses during weekdays. “As there are five workdays compared to two days of weekend, the government should be focusing on the business travel segment by supporting MICE events next year,” he said. For the leisure tourist segment, the PHRI urged the government to start a travel bubble with other countries and continue channeling its incentives for travelers to boost demand. “We are grateful for the government’s incentives program and we hope that it could be carried on to next year,” he said, adding that the industry will face a great challenge during January to March next year, which is considered low season even during normal times.