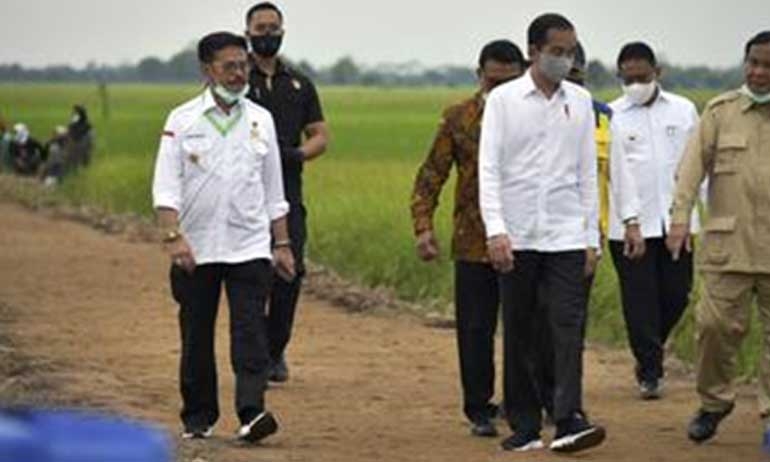 The Ministry of Agriculture (Kementan) released the first export of raw materials from animal origin preparations premix, in this case Feed Supplement in the form of Tryptophan Granule (animal feed amino acid) produced by PT. Cheil Jedang Indonesia. Total exports were 327 tonnes with a value of USD1.5 million or around Rp.22.5 billion. This time, exports are targeting European and Asian markets, namely Germany, England, Vietnam, India, France, Poland and the Netherlands. This proves that amino acid products manufactured in Indonesia are acceptable and comply with international standards.

The Minister of Agriculture (Mentan), Syahrul Yasin Limpo (SYL) gave his appreciation to PT Cheil Jedang Indonesia. Minister of Agriculture SYL assessed that PT Cheil Jedang Indonesia has continued to strive to produce world-standard products in the midst of the difficult conditions during the Covid-19 pandemic. "And we also congratulate the realization of exports today, meaning that everything that the company has done so far has yielded good results," said Minister SYL in his remarks at the export release event, Tuesday (3/11). Minister of Agriculture SYL explained that the average demand for amino acids in the country per year is 53,226 tons with a domestic production capacity of 381,500 tons. So, there is a potential for amino acid exports of 328,274 tons and as of September 2020, 119,496 tons of exports have been realized. He also said that the continuous increase in exports and investment was in line with President Joko Widodo (Jokowi) 's message that exports and investment were important keys to Indonesia's economic progress. With a growing economy, it is hoped that it can reduce inequality, inequality and poverty. "Therefore, I really appreciate, really appreciate the leap of progress from PT. Cheil Jedang Indonesia, which is the first time to export animal-based materials in the form of amino acids. I hope PT. Cheil Jedang Indonesia will continue to improve its export performance in the international market," he explained.

He added that this increase in exports is also in line with one of the Ministry of Agriculture's targets which are targeting an increase in exports of various agricultural commodities, through the Threefold Movement for Agricultural Exports (GRATIEKS), which carries the theme "Advanced, Independent and Modern". With GRATIEKS it is hoped that it can open up greater export opportunities for livestock and animal health business actors. Both large, medium and even micro scale and breeders who are ready to export for the welfare of the Indonesian people. To that end, the Minister of Agriculture, SYL, invites all parties, both the central government, regional governments and business actors to jointly increase exports, by finding new destination countries, and identifying product demand needed by other countries.

However, he warned, quality, quantity and continuity must be met in filling export opportunities. The Minister of SYL considered that there was a need for assurance of competitive quality, the ability to meet the quantity required by importing countries, and continuity of supply. "Besides that, what is no less important is business efficiency so that our products are more competitive," he added. The Director General of Animal Husbandry and Animal Health (Dirjen PKH) of the Ministry of Agriculture, Nasrullah, explained that Indonesian livestock commodities have been able to penetrate the international market so far. Evidenced by several exports of processed chicken meat, swallow nests, animal feed, veterinary medicine, processed milk, live pigs, goats and sheep to dry larvae. "The total number of export destination countries for livestock and animal health products has been to 97 countries," said Nasrullah. Live cattle that have been exported include Singapore, Pakistan, Malaysia, United Arab Emirates and Timor Leste such as cattle, goats, sheep, chickens, rabbits and pigs. Meanwhile, export destinations for fresh and processed livestock products include Singapore, Malaysia, Brunei Darussalam, Japan, Hong Kong, Vietnam and Timor Leste. As for the export destinations for non-food products from livestock, such as China, Japan, Timor Leste, Singapore, England and America. Meanwhile, we have exported livestock seeds and seeds to Malaysia, Myanmar, Cambodia, Timor Leste, Kyrgyzstan, Afghanistan, and Madagascar.

"Especially for veterinary drugs, Indonesia's exports are carried out to many countries, including the Asia Pacific, African, European and American continents," he explained. Based on data from the Central Statistics Agency (BPS), the export performance of livestock commodities in 2020 for the period January to September (preliminary figures) has been recorded at 235,728 tons with a value of USD 632,085,614 or equivalent to IDR 9.48 trillion. This record increased compared to the same period in 2019 (year on year) which only reached 199,135 tons with a value equivalent to IDR 7.05 trillion. The export volume increased by 18.38% and the export value increased by 34.32%. "So, through the GRATIEKS program we are targeting growth in the volume of livestock exports in 2024 to increase by 300 percent to 884,212.