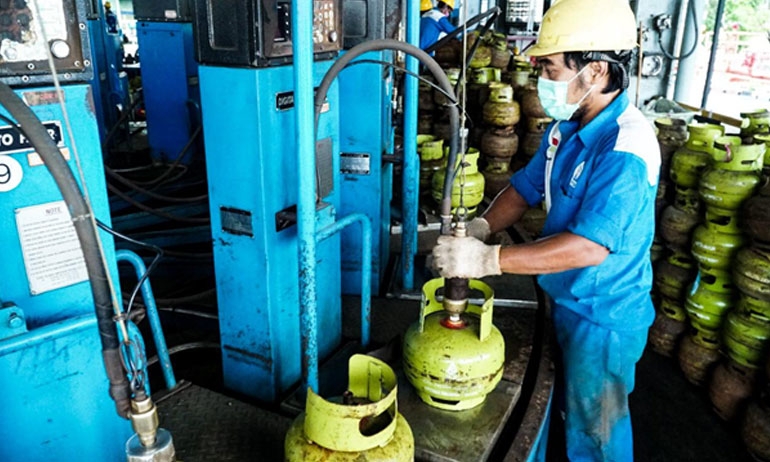 The government is looking to mix coal-based dimethyl ether (DME) and liquefied petroleum gas (LPG) as cooking gas in an effort to reduce Indonesia’s dependence on imported LPG.
The country has long sought to replace the LPG with DME as a cooking fuel, but new official studies have revealed a key limitation with the plan.

The studies found that, compared to LPG, burning DME was less pollutive but also much less hot, which meant the cooking time was up to 20 percent longer, Energy and Mineral Resources Ministry research and development head Dadan Kusdiana told reporters at a press briefing on Wednesday.
Thus, mixing 80 percent LPG with 20 percent DME was the ideal ratio to maximize retail economics, he said, summarizing the studies that were carried out between 2017 and 2020.

“If we mix it like that, the gas can be used with the existing infrastructure,” he added, explaining that conventional stoves and canisters wore out faster when burning pure DME.
Switching to DME is among Indonesia’s many plans to cut consumption of LPG, a fuel the country has been heavily importing at the cost of widening its trade deficit, a key vulnerability for Southeast Asia’s largest economy.
Oil and gas trade booked a deficit of US$3.55 billion during the January-June period this year, while non-oil and gas trade booked a surplus of $9.05 billion in the same period, Statistics Indonesia (BPS) data show.

Ideally, piped natural gas would substitute LPG, as Indonesia already produced more natural gas than needed, said Indonesian Olefin, Aromatic and Plastic Industry Association (INAPLAS) secretary-general Fajar Budiono.
“But the household gas pipes cannot yet reach every corner of the country,” he said. “The pipes are only for big cities and big islands.”

To supply cooking gas to regions not connected by pipelines, the government plans to distribute canisters of DME derived from domestically mined low-calorie coal. Indonesian reserves hold around 2 billion tons of such a coal, mostly unused.
The energy ministry estimates that around 6 million tons of the coal is needed to produce 1.5 million tons of DME, and it estimates the DME price needs to be below $563 per ton to be economical when compared with LPG.
However, only one company, namely state-owned coal miner PT Bukit Asam, has announced a plan to develop a coal-to-DME facility thus far.

The company, working with United States-based chemical manufacturer Air Products and Chemicals Ltd, plans to develop a $2 billion facility that produces 1.4 million tons of DME a year. Such an output level requires 6.5 million tons of coal.
“That 1.4 million tons is about enough to meet Sumatra’s LPG needs,” said Dadan.

PTBA and state-owned oil giant Pertamina, the country’s top LPG distributor, previously calculated that selling the cheap coal at $20 per ton – the market price for regular coal is now at $52.16 per ton – would allow coal-derived DME to compete with LPG.
Bukit Asam president director Arviyan Arifin said on June 10 that the company was currently working on the facility’s early phase project planning, known as front end engineering design (FEED).
“We hope to begin commercial operation in 2024-2025,” he said