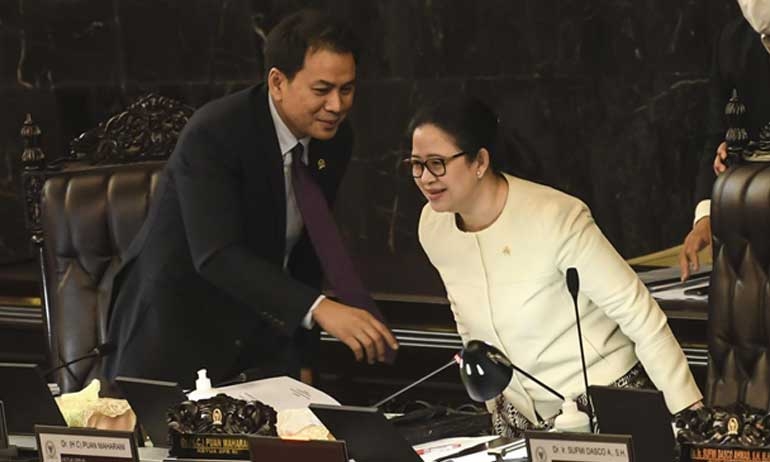 As the country grapples with the COVID-19 crisis, lawmakers have approved a controversial revision of the 2009 Coal and Mineral Mining Law, despite outcry from civil society organizations.
The new law, aimed at developing Indonesia’s downstream mining industry and increasing economic growth, will allow miners to extend permits through a simpler and centralized bureaucratic process.
Civil groups have lambasted the regulation over concerns of its impact on the environment and society.

After months of deliberation, eight of the nine parties at the House of Representatives (DPR) agreed on Tuesday to pass the bill, with the Democratic Party being the only one to oppose it.
“I ask all members at this second-level meeting once again: Can we agree to pass the revision of the 2009 Mining Law? Agreed,” said House Speaker Puan Maharani in a live broadcast plenary meeting, followed by the knock of the mallet.
The House and the government, led by the Energy and Mineral Resources Ministry, only publicly released the finalized draft on Monday, a copy of which was obtained by The Jakarta Post.

The bill revises 82 percent of 175 articles in the original Mining Law and adds two new chapters. Civil society groups have criticized the changes as sidelining regional autonomy, environmental protection and local communities.
The revisions have been designed to harmonize with mining rules under the omnibus law on job creation, another game-changing piece of new legislation.
Energy and Mineral Resources Minister Arifin Tasrif, speaking on Tuesday, said the bill aimed to stimulate downstream value-added industries while also providing legal certainty for investment in such industries.
“And, most importantly, it maximizes benefits for the people,” he said.

Minister Arifin had told legislators on Monday that the government disagreed with two articles in the draft, both of which were then changed later that day.
Article 112 of the draft required foreign-owned miners to divest a 51 percent share to Indonesian entities ‘in one go’. The wording was later changed to 'in stages', and the government was given authority to determine the terms of the stages.
“We remind you that, with the ongoing [coronavirus] crisis, we must look at the availability of investment funds going forward,” said the minister.

The bill also added a clause under Article 102 that pegged the minimal metal ore processing output quota to “domestic market demand.” The phrase was changed to “market demand” to accommodate export-scale industries.
“If project economics are not profitable today, the government has taken a stance to kickstart processing and refining activities,” Djoko Widajanto of the Indonesian Mining Association (IMA) told the Post on Tuesday. The Indonesian Coal Mining Association (APBI) has also shown support for the new law.
“We are certain the bill will provide long-term legal and investment certainty,” said Indonesian Coal Mining Association (APBI) executive director Hendra Sinadia, also on Tuesday.

The bill reflects many stakeholders’ interests, including metal ore exporters, mining giants as well as – to a lesser extent – local communities and environmentalists.
Notable revisions include quadrupling the maximum size of traditional mining zones to 100 hectares and permission for mining activity in rivers and the sea.
Meanwhile, the revision cuts red tape for miners by centralizing permit issuance at the Energy Ministry instead of keeping governors and regents in charge.

“DPR members lacked sensitivity during the legislative process toward the fact that mining should solve both economic and social wellbeing issues,” said Maryati Abdullah of mining industry watchdog Publish What You Pay (PWYP).
PWYP and other mining industry watchdogs in a statement on Tuesday urged lawmakers to delay deliberations over the bill until after the coronavirus pandemic, arguing Indonesia was better off focusing its resources on tackling COVID-19 as one of Southeast Asia’s hardest-hit countries.
The watchdogs also include the Mining Advocacy Network (Jatam), the Indonesian Legal Aid Foundation (YLBHI), AURIGA Nusantara, Indonesian Forum for the Environment (Walhi) and Indonesia Corruption Watch (ICW).
“Discussions were done secretly, without participation and continued a narrative full of problematic articles,” those four watchdogs stated, adding that they had not been invited to discussions of the draft.

According to Jatam’s latest annual report, 783 mining licences were “involved” in seven major natural disasters last year. The disasters, comprising floods and landslides, killed 35 people and displaced 83,722 residents.
One notable case highlighted in the report was the presence of eight coal mines within the river basin area of Bengkulu province. The mines left the region vulnerable to a massive flood last year that killed 24 and displaced 12,000 people.

“There is no urgency [to deliberate the bill] except one: saving those six corporations that control 70 percent of national production,” said economist Faisal Basri of the Institute for Development of Economics and Finance (Indef) in a discussion about the bill in April.
He was referring to six giant coal miners whose legal bases are slated to expire between 2020 and 2025, including PT Adaro Energy, whose permit expires in 2022.
The deliberation of the bill had dragged on since 2015, with serious discussions over the most recent draft only beginning last year.