Demand for Photovoltaic Panels Plummets in Indonesia Amid Pandemic 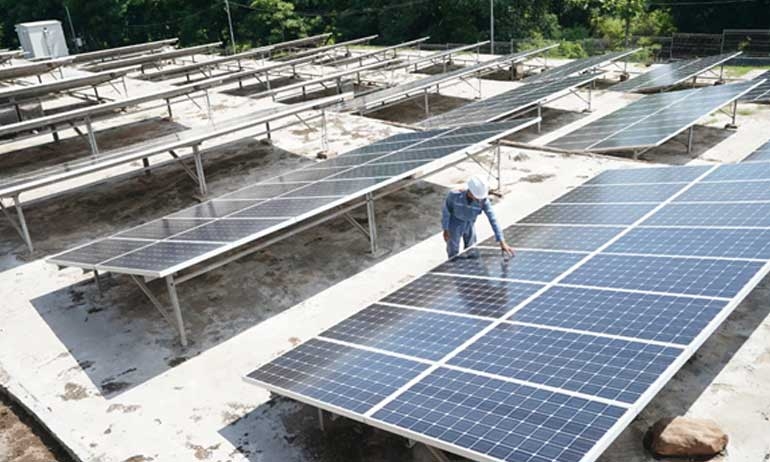 Indonesia’s photovoltaic (PV) providers face a bleak business outlook at least in the next six months as the government and individual users cut back spending on anything deemed nonessential amid the pandemic, including solar panels.

Demand for commercial PV panels was down up to 70 percent in the March-April period from a year earlier as businesses aborted installation plans and as, most critically, the government cut back electrification project plans, according to a recent survey conducted by energy think tank Institute for Essential Services Reform (IESR).

Meanwhile, demand for residential PV systems dropped by up to 100 percent during the same period as consumers reallocated funding to groceries, bills and savings.
“We see the outlook over the next six months – until the third quarter of 2020 – as largely negative. No new orders,” IESR executive director Fabby Tumiwa said during a virtual press conference on April 21.
The challenges faced by Indonesia’s solar power industry are similar to those across developing renewable markets in Asia, such as India and Vietnam, where local producers are equally exposed to foreign exchange risks and shrinking financial support.

“So far no government has taken a strong stand to support renewables during the downturn,” wrote energy consultancy Wood Mackenzie Asia Pacific in a press note on April 29.
Solar power contributes less than 4 percent to overall energy consumption in the Asia Pacific region but is the fastest-growing renewable energy source worldwide alongside wind power.
In Indonesia’s case, the domestic solar industry is at the mercy of the government, which accounts for more than 70 percent of the electricity business through electrification projects, according to an Indonesian Solar Panel Producers Association (APAMSI) representative.

“That automatically means that a shift in spending will add to the burden on solar producers,” APAMSI chairman Nick Nurrachman told The Jakarta Post on Monday (27/4).
“Due to the COVID lockdown, the industry can close down,” either temporarily or permanently, he said.
The government announced in late March a plan to reallocate Rp 62.3 trillion (US$4.15 billion) from the state budget to tackle the coronavirus. The freed funds would focus on health care, the disbursement of relief funds and financial incentives for enterprises.

He said the ministry had revised down its target for government-funded solar rooftop installations from 800 units to 144 units and for solar-powered streetlamps from 40,000 to 26,000. The lamps are installed in hard-to-reach regions with poor electricity infrastructure.
“There’s a reduction in volume as we refocus the state budget on attainable projects,” he told reporters during a video conference earlier this month (22/4).