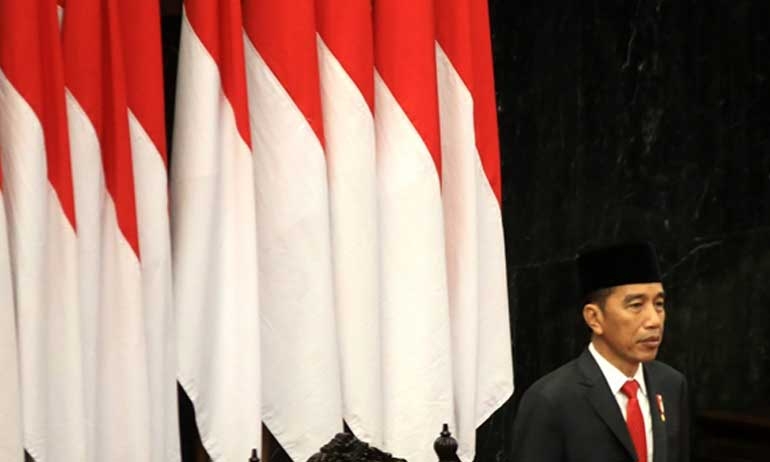 The government is looking to address issues related to foreign workers, severance pay, minimum wage and working hours deemed as unfavorable for investors in the omnibus bill on job creation, high-ranking officials have said.
President Joko “Jokowi” Widodo instructed ministers on Monday to conclude drafting the omnibus bill on job creation next week. “[I asked the ministers that] the omnibus law [draft] be finished this week [or] next week, at the latest,” he said.
Manpower Minister Ida Fauziyah said the ministry and the Office of the Coordinating Economic Minister would indeed conclude discussions next week so the draft could be brought to the House of Representatives for deliberation.

“Basically, we are only focusing on five issues, including minimum wage, severance pay and working hours, among other things,” Ida told reporters after attending the Cabinet’s first meeting this year at the Presidential Palace in Jakarta on Monday.
Coordinating Economic Minister Airlangga Hartarto said on Dec. 20 that the bill would also include the government’s plan to ease the recruitment of foreign workers, among others.
“We discussed the hiring [process] and foreign workers so that expatriates could enter [and work in the country] without [having to wait for] long,” Airlangga told reporters during a press briefing in Jakarta, adding that the prevailing Immigration Law had made it hard for foreign workers to earn a temporary stay permit (KITAS).

For the planned omnibus law on job creation, the government has identified 1,194 articles in 82 laws that would be amended to accommodate one of President Joko “Jokowi” Widodo’s top priorities: attracting investment to create more jobs.
The job creation bill will touch on 11 clusters of issues, including simpler licensing procedures and labor and land procurement as part of a broader effort to improve competitiveness.

Airlangga said the government would provide “flexibility” for outsourcing foreign workers working in Indonesian start-ups while also pay attention to the development of domestic workers.
“A lot of our unicorn companies are [start-ups valued at more than US$1 billion] conducting outsourcing in Bangalore [India]. With more flexible regulations, we are hoping that they could move to Indonesia.”
With the job creation omnibus bill, the government is also looking to bridge the deeply rooted skills gap in the digital economy, with digital talent gaps of about 600,000 per year.

“Retraining and reskilling programs are part of a survival kit; this [600,000 talents] is the size of the gap we need to fill as we need a coordinated effort to tackle the talent deficit,” said Gojek vice president of data science Syafri Bahar in a December discussion organized by The Jakarta Post.
Contacted separately, Indonesian E-commerce Association (IdEA) chairman Ignatius Untung said foreign workers in Indonesian start-ups only comprised about less than 5 percent of all employees in a company.

“There are start-ups that employ foreigners because they need specific skillsets in which Indonesians lack, such as that pertaining to artificial intelligence. However, there are also companies that employ foreigners [simply] because they need more qualified workers,” he told the Post in a phone interview.
Ignatius welcomed the government’s decision to simplify the bureaucratic process of recruiting foreign workers. He, however, said the government should also push for tighter selection in a bid to reduce unemployment.
Indonesia’s open unemployment rate slightly dropped to 5.01 percent in February this year from 5.13 percent in the same month last year, according to Statistics Indonesia (BPS). However, the highest unemployment rate was recorded by vocational school graduates, although the education system was meant to prepare students for real employment upon graduation.

“We should make sure that every company looks at the labor market before they decide to hire foreigners. Once they have undertaken such a process and still do not find what they are looking for, they should be allowed to hire foreigners,” Ignatius added.
A McKinsey & Company report entitled Automation and the Future of Work in Indonesia found that 23 million jobs could be displaced by automation by 2030, but 27 million to 46 million new jobs could be created in the same period if Indonesians learned new skills.
Reskilling, therefore, was key as the IBM’s Institute for Business Value also noted that 120 million workers from the world’s 12 largest economies, including Indonesia, may need to participate in reskilling programs in the next three years as a result of automation enabled by artificial intelligence.
Airlangga said the planned omnibus law would also regulate working hours, wage calculation and micro, small and medium enterprises (MSMEs) workers. “Work agreement and workers’ rights will be guaranteed. There is a possibility that wages could be based on working hours or day [but] we will provide more flexibility.”

According to the World Bank’s ease of doing business index, which placed Indonesia at 73rd position, the country’s rigid employment and minimum wage regulations are among factors causing the country’s stagnating rank.
“Strict employment protection legislation shapes firms’ incentives to enter and exit the economy, which in turn has implications for job creation and economic growth […] a 10 percentage-point increase in the minimum wage in Indonesia was associated with a 0.8-percentage point decrease in employment on average,” the report reads.