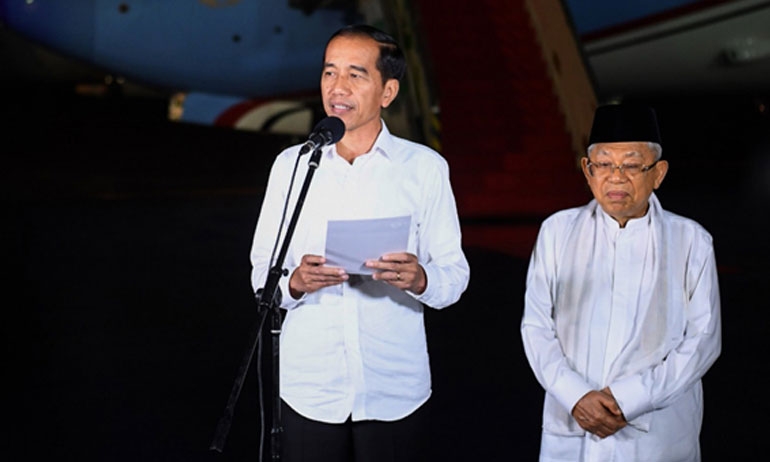 With Indonesia’s economy softening and facing pressure from around the world, President Joko “Jokowi” Widodo plans to overhaul the Cabinet to address economic issues to boost exports, investments and the digital economy.
President Jokowi, who is to take up his second five-year term starting in October, said the upcoming lineup of Cabinet ministers has been finalized and is to be announced in the near future.
While the number of ministries would remain the same at 34, several ministries would be given new economy-related tasks, with an aim to improve exports and the current account deficit, which the President said was the country's biggest economic problem at present.
"We will give the task of improving exports to the Foreign Affairs Ministry. The additional function is not political, but for economic diplomacy," Jokowi told a group of chief editors, including The Jakarta Post’s, at the Merdeka Palace in Jakarta on Wednesday.
The Trade Ministry is to be merged with Industry Ministry to focus on domestic trade, he added.

Indonesia’s current account, an important indicator for investors to evaluate a country’s economic health, has been under pressure from weak exports, touching an alarming level of 3.04 percent of Indonesia’s gross domestic product in the second quarter.
Adverse effects of the ongoing United States-China trade war have weakened economies worldwide, dragging down global demand for Indonesian exports. Exacerbating the problem is the intense trade pressure from the European Union’s barriers against Indonesian biodiesel shipments.
Economic growth slowed to a two-year low of 5.05 percent in the second quarter of this year, as investments and export growth sank to levels unseen in recent years.
A new investment ministry tasked with bringing in foreign investment is also in the works, with the Investment Coordinating Board (BKPM) slated to be positioned under it. Foreign direct investment grew modestly by 4 percent year-on-year in the first six months of this year, after contracting 1.1 percent in the same period last year.

Another new ministry would be tasked to oversee the digital and creative economy, as the country is poised to have Southeast Asia’s largest digital economy with a value tripling to US$100 billion by 2025, according to a 2018 Google-Temasek “e-Conomy of Southeast Asia” study.
“Technology has moved forward, but our regulations have not,” said Jokowi, adding that Kominfo should be able to face fresh challenges presented by tech giants such as Google and Facebook.
Although the names of the ministers have yet to be announced, speculation was rife that several of the current ones would be replaced, such as Coordinating Economic Affairs Darmin Minister Nasution, State-Owned Enterprises Minister Rini Soemarno and Energy and Mineral Resources Minister Ignasius Jonan, among others.

Masinton Pasaribu, a spokesman for Jokowi’s campaign from the Indonesian Democratic Party of Struggle (PDI-P), also mentioned Environment and Forestry Minister Siti Nurbaya Bakar and Agrarian and Spatial Planning Minister Sofyan Djalil as having been called out on their failure to support investments.
President Jokowi and his ruling coalition, made up of nine political parties that supported his campaign with vice president-elect Ma’ruf Amin, have their hands full with the possibility of the opposition Gerindra Party, led by former rival Prabowo Subianto, joining the government.
With the increased demand from all the political parties to be allocated strategic seats in the government, Jokowi stressed it was his prerogative to appoint ministers and form the Cabinet, saying that 55 percent of the ministers would be technocrats and the remaining 45 percent would be from political parties.
“Do you know what a Cabinet is? It is a prerogative right of the President. Ministers are the President’s prerogative,” Jokowi told reporters during the Indonesian Scout Movement’s 58th birthday celebration in Cibubur on Wednesday.
The potential new coalition members, coupled with ongoing Corruption Eradication Commission (KPK) investigations into graft cases that implicate current Cabinet members, seemed to affect decision making over the new Cabinet.

Three ministers in Jokowi’s current Cabinet have been implicated in graft cases: Youth and Sports Minister Imam Nahrawi of the National Awakening Party (PKB), Religious Affairs Minister Lukman Hakim Saifuddin of the United Development Party (PPP) and Trade Minister Enggartiasto Lukita of the NasDem Party.
Indonesian Institute of Sciences (LIPI) economist Latif Adam said that the changes in the ministries seemed to be geared toward fulfilling the President's campaign promises.
"In his victory speech in Sentul last month, Jokowi kept talking about increasing investment levels and raising exports," he told the Post on Wednesday. "These are the first concrete actions he's taken to achieve that."
The new investment ministry would provide an upgrade to the BPKM, which has often seen its efforts to incentivize foreign investment hampered by a lack of cooperation from other ministries, Latif said.
The new exports-related mandate for the Foreign Affairs Ministry, which seemed to have been inspired by Australia's Department of Foreign Affairs and Trade (DFAT), could be effective given that ambassadors and diplomats may be better placed that to understand foreign trade regulations and climates, he added.

Indonesia Political Review executive director Ujang Komarudin said that while the announcement on Wednesday seemed to have been made in response to public speculation, questions would continue to be raised until the names were actually announced.

"The President should announce the names soon so that the public can vet the potential ministers for possible legal problems and other issues," he said. "Professionals have fewer conflicts of interest and don't have to pay dues to political parties, which will help them focus more on their duty to improve the economy.”