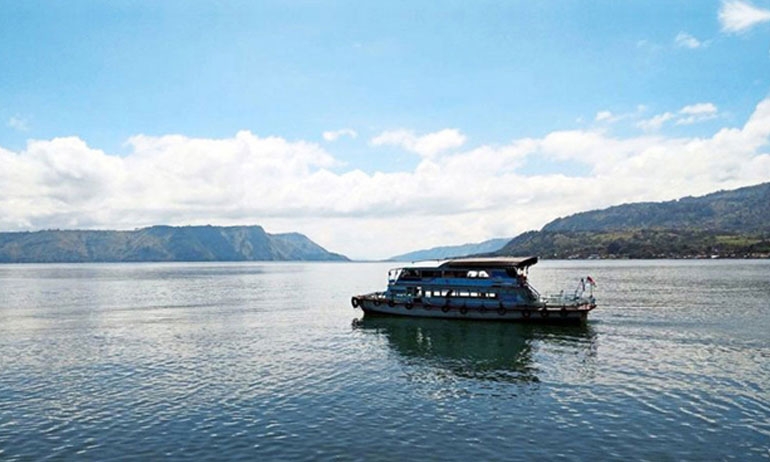 As the largest volcanic lake in the world, Lake Toba in North Sumatra has what it takes to be developed into a world-class tourist destination, especially under President Joko “Jokowi” Widodo 10 new Balis initiative, which aims to boost the economy amid stagnating consumer spending and a slowing investment outlook.
However, a lack of basic tourist infrastructure has become a major obstacle in fulfilling the President’s wishes, with water pollution issues and several recent boat accidents putting a dent in the lake’s reputation. Passenger boat Sinar Bangun sank in the lake last year, causing hundreds to go missing. Only six days later, KM Ramos Risma Marisi got into an accident that killed one of its crew members.

For visitors of the giant lake, accessibility is also a major issue. It takes a seven-hour, 250-kilometer drive to reach the 1,130-square-km lake from the province’s main airport, Kualanamu International Airport in Medan.
As such, the government opened Silangit International Airport in North Tapanuli in November 2017 to bring tourists closer to Lake Toba. It also opened a smaller airport, Sibisa, in Toba Samosir regency.
Despite all this, the government believes there is more work to be done. The Public Works and Housing Ministry set aside Rp 2.4 trillion (US$168.4 million) in 2020 funds, almost triple this year’s budget, to build several infrastructure projects at the lake and its surrounding areas.
The projects include the Samosir Ring Road, Tano Ponggol Bridge connecting Samosir to mainland Sumatra, toll road development, water reservoir development, sanitation projects and improvements to tourist sites.

The ministry is also working to finish the 143.5-km Kuala Tanjung-Tebing Tinggi-Parapat toll road to improve transportation between Medan and Lake Toba.
On Samosir, a 630-square-km isle located in the middle of the lake, several facilities are under development and traditional houses in villages are being revitalized.
“In the villages, aside from the weaving center, there are enough traditional houses to make [the area] a traditional heritage village complex. We will try to revitalize 40 houses there,” said Public Works and Housing Minister Basuki Hadimuljono, adding that sanitation development would also be carried out in the traditional villages.

Coordinating Maritime Affairs Minister Luhut Pandjaitan said all basic and supporting infrastructure was set to be finished by 2020.
Lake Toba is surrounded by nature, including pine forests and hiking areas Geosite Sipinsur in Humbang Hasundutan and Sigulati Geopark on Samosir Island.
Culture-focused tourist destinations are also scattered in and around the area: Huta Siallagan Kampong is a traditional Batak village and Ulos Kampong in Samosir is famous for being the production center for ulos(traditional North Sumatran woven fabric).
There were 28 government-listed tourist sites in the area, Jokowi said during his visit to Lake Toba late last month.

“Making the product better is not only about developing the tourist destination, but also making sure that everything is integrated; the products, the package, the brand. That will differentiate Toba with other destinations, like Mandalika or Bali,” Jokowi said.
“As of now, the products have no package, no written stories.”
Separately, Tourism Minister Arief Yahya said the groundbreaking ceremony for hotel development on 387 hectares of land under the Lake Toba Tourism Authority Agency would begin this year.
Environmental sustainability is also a problem at Lake Toba.

North Sumatra Governor Edy Rahmayadi said he had asked Jokowi to revoke the business licenses of floating fish net cage operators PT Aquafarm Nusantara and PT Suritani Pemuka for allegedly polluting the lake.
“I have also sent a letter to [the environment and forestry] minister to stop the companies’ operations because we are no authorized to do so,” he said, noting that it was difficult to punish the companies, as their licenses were issued by the central government.
According to provincial data, PT Aquafarm Nusantara owns 322 fish cages in Lake Toba while PT Suritani Pemuka owns 184.
Jokowi, during his visit, threatened to revoke the business licenses of companies that polluted the lake.

“It is only right that the companies destroying Lake Toba’s environment are forced to shut down because they bring a negative impact to tourism,” Edy said.