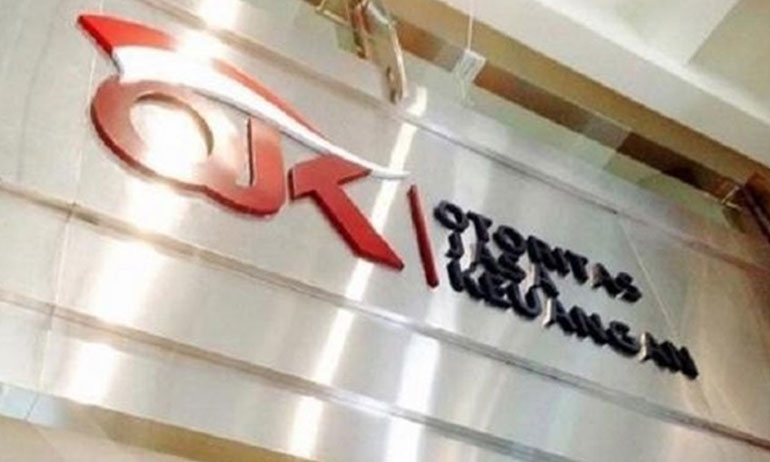 The Financial Services Authority (OJK) logo is seen on the frontispiece at its headquarters in Jakarta.(kontan.co.id/File)
Banks welcomed the Financial Services Authority's (OJK) plan to relax bank ownership rules as it is expected to encourage more deals in the banking industry, although it comes with risks.
OJK banking supervisory division head Heru Kristiayana confirmed that the agency would soon no longer require banks within the third and fourth quartiles to have a single ownership system in its acquisition process with small banks, which could later function into specialized satellite institutions.
“The relaxation will act as a sweetener for bigger banks to consolidate with smaller banks. Otherwise, they may not find it worthwhile to merge with smaller banks,” Heru told The Jakarta Post on Friday, without disclosing details of the timeline of the policy revision.
The so-called single presence policy, rolled out in 2006 to consolidate 2,000 banks in the country, obliges local banks’ majority shareholders to own only one banking entity, therefore requiring mergers when it acquires banks with a different portfolio.
By relaxing the rule, foreign and domestic banks can invest in local lenders with ease. Small banks could be more exposed to better funding, technology and human capital, Heru said.
The number of commercial banks in Indonesia, the highest in the region, stands at 115 banks, compared with 124 banks in 2012 and 138 in 2004.
That compares with the banking architecture roadmap rolled out by Bank Indonesia that projected the industry by 2014 would have three international-class banks with over US$5.8 billion capital, three to five national anchor banks with $1.5 billion to $5.8 billion capital and 30 to 50 smaller specialized banks.
With figures stuck at beyond 100 banks to date, Heru said slimming down the number of banks in the country should not be the main focus anymore. The spirit of consolidation needs to be shifted to emphasize how it could push smaller banks’ contribution to the industry instead, he added.
"If there are more banks that could be productive, wouldn't that be better for the economy?" Heru said.
Banks and economists welcomed the OJK’s plan to revise the single presence policy, saying that it could bolster investment in the banking industry that is facing fierce competition for savings and deposits with other financial players, especially in the fintech sphere.
State-owned lender Bank Rakyat Indonesia finance director Haru Koesmahargyo, for instance, said the new rule would no longer hassle banks to merge after acquisitions. Merging is considered to be lengthy and complex considering that different banks have different business models, company cultures and technology.
Besides, the revised regulation would ease the OJK in supervising the industry players grouped under one parental firm, Haru said.
Private lender BCA president director Jahja Setiatmadja also deemed the change to be positive, saying that big banks could now better focus on specific sectors through specialized small banks. BCA recently bought out smaller lender Bank Royal Indonesia so that the latter could focus on digital banking and support BCA's digitization efforts.
Maybank Indonesia economist Myrdal Gunarto said that relaxation could potentially attract foreign banks to invest in domestic banks, especially if local capacity has reached its limits.
“But we still have to keep an eye on foreign banks so that they don’t go in and out of the country, and create instability for the domestic industry,” Myrdal said.
Under the rule’s amendment in 2012, Indonesia restricts a single banking entity from owning more than 40 percent of local lenders, compelling Singapore-based lender DBS Group Holdings to abandon its planned takeover of Bank Danamon Indonesia.
Indonesia has loosened the 40 percent rule since then, easing Japan’s Mitsubishi UFJ Financial Group Inc. to take control of Danamon earlier this year, and for Sumitomo Mitsui Financial Group Inc. to buy Bank Tabungan Pensiunan Nasional.