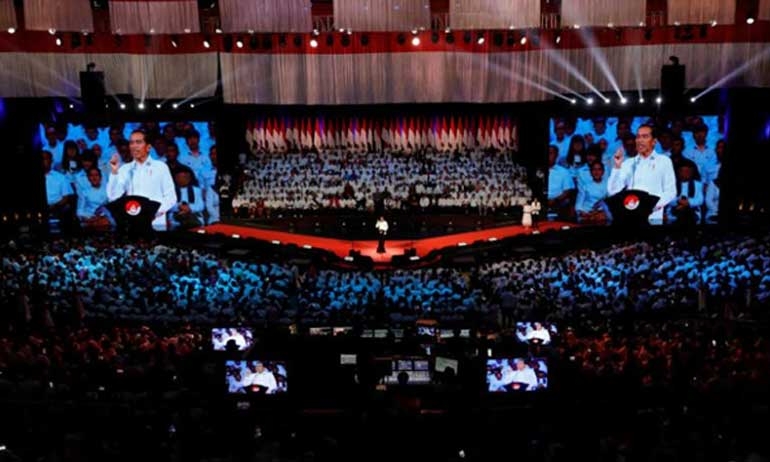 JAKARTA - Indonesian President Joko Widodo delivered his first speech on Sunday (July 14) since being re-elected, and laid out his vision for his second term, which will see the government shift the focus from infrastructure development to building up the quality of human resources in the country.
Mr Joko outlined steps to make the country a more "productive and competitive" nation amid rapid and unpredictable changes globally.
He said that the government will continue developing infrastructure, his signature programme in his first five-year tenure from 2014 to this year, and seek to link already-built infrastructure to economic centres.
"In future, we will continue to do it faster and infrastructure like toll roads, train lines, seaports and airports will be connected to production centres, small industrial estates, and special economic zones and tourism zones.
"That's our orientation and we must focus on that," he said in his speech titled "Indonesia's vision", which was broadcast live by local television stations from Sentul International Convention Centre in Bogor, West Java.
But he said the government will change the flagship programme to human resource development, a promise he made when campaigning ahead of the presidential elections in April.
"We want to put our priority on human resources development. Human resources development will be key to Indonesia's future," he said, adding that a national talent management bodies will be set up and support for highly-talented Indonesian diaspora will be provided.
He said the programme will need to address issues like impaired growth and development of children and the high maternal mortality rate, as well as improve the quality of education.
Mr Joko also stressed the importance of investment for job creation.
"All obstacles hindering investment, whether slow and complicated licensing processes or illegal fees, will be eliminated," he said to a rousing response from around 30,000 people at the centre.
"There will be no more obstacles to investment as that would be key to generate as many jobs as possible."
Mr Joko, who will be inaugurated on Oct 20 as Indonesia's seventh president, said he is also committed to bureaucratic reforms to improve public services, a campaign platform of his since he first entered politics 15 years ago.
"I will check and control (the process) on my own. If I see inefficiencies and ineffectiveness, I will solve them and fire the officials," said the former Jakarta governor, noting that his government will seek brave ministers.
"If there are useless and troubled institutions, I will certainly dissolve them," he said.