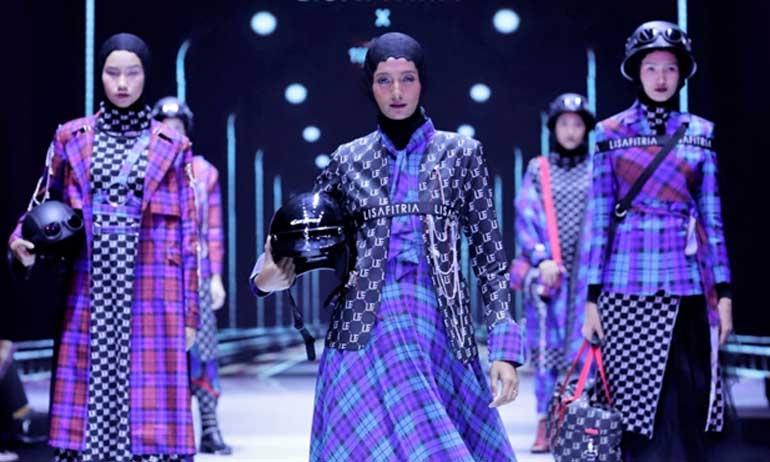 As the country with the largest Muslim population in the world, Indonesia is aiming to promote its modest fashion scene to the global market through exports of Muslimwear.
Modest fashion is a multibillion-dollar industry in Indonesia alone, having accumulated sales worth Rp 177 trillion (US$12.35 billion) in the domestic market last year, according to the Indonesia Halal Lifestyle Center (IHLC).
However, current modest fashion exports have yet to reach similar heights because few Muslimwear fashion designers have ventured overseas, said IHLC chairman Sapta Nirwandar
“There was more than $7 billion in exports to the Organization of Islamic Cooperation [OIC] countries in 2017, but nearly all of [the products] were raw materials,” Sapta told The Jakarta Post.
The Dinar Standard Report shows that Indonesia’s share of halal exports sent to OIC countries only totaled $7.6 billion in 2017, a mere 3.07 percent of the total $249 billion by OIC countries.
Indonesia is currently the 10th largest exporter to the OIC, lagging behind Brazil as the top halal products exporter with a total value of $18 billion, followed by the United States and India.
Sapta estimated that modest fashion exports to OIC countries could have made up 20 percent of the total figure, and that excludes countries that are not Muslim-majorities but are the global fashion compasses, such as the US and France.
A number of local Muslimwear designers, he pointed out, had been featured in the some of the world’s most prestigious fashion events, like New York Fashion Week and London Fashion Week.
Nevertheless, he was optimistic about the industry’s future as more local designers are beginning to emerge and receive acclaim both domestically and abroad.
As for 2019, Sapta said the export goal for modest fashion should be at least 10 percent out of the Rp 177 trillion domestic market recorded last year, with the figure to grow by 5 to 7 percent in the next few years.
“We want the Indonesian modest fashion scene to create global trends instead of just following them,” he said.
“Next year, Indonesia should become the global center of modest fashion, but designers and the market should be able to diversify their focus, including on male modest fashion and modest sportswear, which is really trending right now.”
The Industry Ministry revealed earlier this month that OIC countries had $191 billion in market potential for modest fashion, a potential that Indonesia has yet to benefit from as it is still primarily a consumer base.
“Citing data from the 2018/2019 State of Global Islamic Economy Report, Indonesia is still a runner-up [in terms of modest fashion development] in the world, after the United Arab Emirates,” Industry Minister Airlangga Hartarto said in a statement.
The report also estimates that the annual global spending across all segments by Muslims could reach $3.07 trillion by 2023, from $2.17 trillion in 2017, owing to the rise of middle-class Muslims and their increased spending.
The halal food and beverages sector is estimated to become the main spending destination at $1.86 trillion, followed by fashion at $361 billion and tourism at $274 billion.
Spending on leisure and halal pharmaceutics, meanwhile, is projected to reach $200 billion and $131 billion, respectively.
Airlangga encouraged stakeholders to keep on developing Indonesia’s modest fashion presence in foreign markets, especially those that empower small and medium enterprises (SMEs).
“In today’s digital era, our SMEs should have more opportunities to reach a wider market [overseas],” he added.