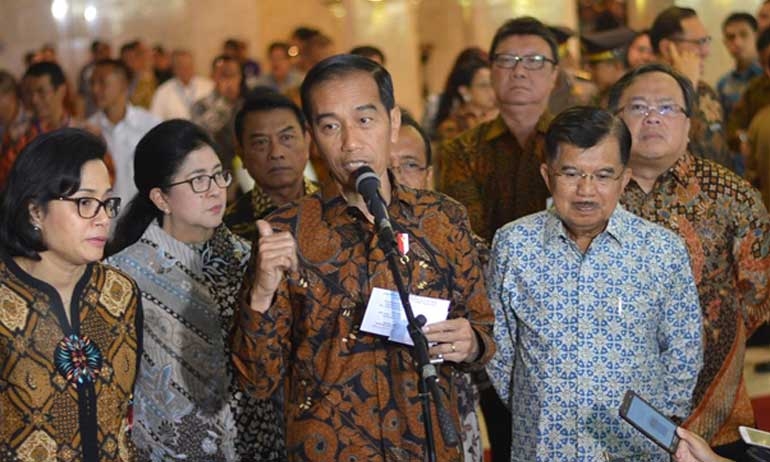 President Joko “Jokowi” Widodo has reaffirmed his commitment to structural reforms during his "second term" to attract more investment to the country and to boost exports, saying that Indonesia needed to work hard to realize its immense potential as an economic powerhouse.
The unofficial quick count results point to victory for the incumbent and his running mate Ma’ruf Amin. The General Elections Commission (KPU) is to announce the official results on May 22, but challenger Prabowo Subianto-Sandiaga Uno has vowed to contest the official results if the KPU did not act upon its alleged findings of foul play at the polls.
Speaking before regional leaders during the National Development Planning Conference (Musrenbangnas) on Thursday at the Hotel Shangri-La in Jakarta, Jokowi said structural reforms, including cutting red tape and slimming down the bureaucracy, would be one of his main priorities over the next five years.
“With regard to licensing, the central and regional [governments] should be brave in cutting [red tape]," he said. “Without [taking] such a move, we cannot dream of becoming the fourth or fifth largest economy in the world.”
A National Development Planning Board (Bappenas) study revealed that Indonesia was on course to become the fifth largest economy in the world by 2045 – as long as it maintained an annual gross domestic product (GDP) growth rate of 5.7 percent, it executed its structural reform agenda as planned, and that external factors remained conducive in terms of relatively high global GDP growth.
Jokowi added that he was committed to dissolving state institutions that had proved ineffective, as a leaner bureaucracy would allow the government to respond with flexibility to the latest developments.
He affirmed that his administration would not shy away from making bold structural reform policies, as he had been successful in his reelection bid in the presidential election on April 18. “In the next five years – I apologize – I have no burdens. I will do whatever is best for the country,” he stressed.
Jokowi said structural reforms, which would attract export-oriented and import-substitution investments, were necessary to solve Indonesia’s persisting current account deficit – an indicator widely cited as a major cause of last year's volatility of the rupiah.
Bank Central Asia (BCA) chief economist David Sumual has urged the government to start reforms by revamping its regulations, particularly those deemed to hamper foreign investment.
David added that simplifying regulations would help drive entrepreneurship and improve the country's ranking in the World Bank’s Ease of Doing Business (EODB).
Indonesia dropped one rank to 73rd among 190 countries in the latest EODB report released last year, and ranked 134th in the “starting a business” indicator.
During the Musrenbangnas, National Planning Development Minister Bambang Brodjonegoro submitted to Jokowi a technical design of the National Medium-Term Development Plan (RPJMN) for 2020-2024 and "Indonesia 2045", a long-term vision toward the centenary of Indonesian independence.
Under the next iteration of the RPJMN, the government aimed to grow the economy at an average rate of 5.4 percent to 6 percent, while reducing poverty, unemployment and inequality, said Bambang.
He added that the government would especially focus its efforts on improving Indonesia’s current account deficit through the RPJMN 2020-2024 by diversifying its export products to improve the trade balance.
“We have to boost tourism and diversify exports so that we do not rely only on natural resources,” said Bambang, and that the manufacturing sector should also be encouraged to boost its export output.