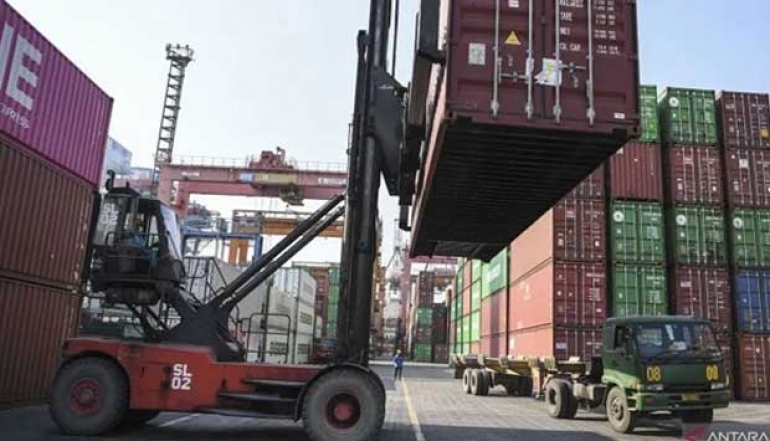 The export performance of the manufacturing industry during January-May 2022 reached 83.73 billion US dollars, or grew 25% over the same period last year of 66.99 billion US dollars in the midst of a continuing trade balance surplus. The shipping value of the industrial sector gave the highest contribution, penetrating 72.83% of the total national export value for the past five months, which touched USD 114.97 billion. "Export achievements from the manufacturing industry sector contributed to Indonesia's trade balance which continued its surplus trend in May 2022, with a value reaching USD 2.89 billion. This surplus trend has been experienced since May 2020 or for 25 consecutive months," said Industry Minister Agus Gumiwang Kartasasmita in his statement in Jakarta, Tuesday. The Minister of Industry explained that the performance of the trade balance, which again recorded a surplus value, needs to be grateful because it is the capital in supporting the ongoing national economic recovery efforts. "As one of the steps to maintain a trade balance surplus, the government continues to encourage the expansion of export markets to various countries," he said.

According to Agus, the industrial sectors in Indonesia are increasingly aggressive in expanding their export markets, such as to European countries, including the Netherlands, Germany and others. These countries are being affected by the supply of goods due to the Russo-Ukrainian war. "We are also actively encouraging small and medium-sized industrial products (IKM) to go international," he said. Furthermore, the ability of the industrial sector to penetrate the export market shows that the products of the nation's children are recognized and sought after by foreign countries because they comply with applicable standards and quality. For example, Indonesia has succeeded in exporting cars to the Australian market, which proves that Indonesian vehicle products are competitive. “The car has Euro 4 standard, which is a classification or requirement from Australia. This is something that we are very proud of, meaning that Indonesia is able to produce cars with emission standards set by countries such as Australia and Europe,” he explained. The Minister of Industry emphasized that the government is increasingly encouraging bilateral and multilateral cooperation that can expand market access for competitive national industrial products in the global arena. "Including forums in the series of Indonesia's G20 Presidency which can become media that can be optimized to achieve the goals of international cooperation," he added.