Hundreds of Outstanding Students in Cilegon Earn Scholarships from Tenaris 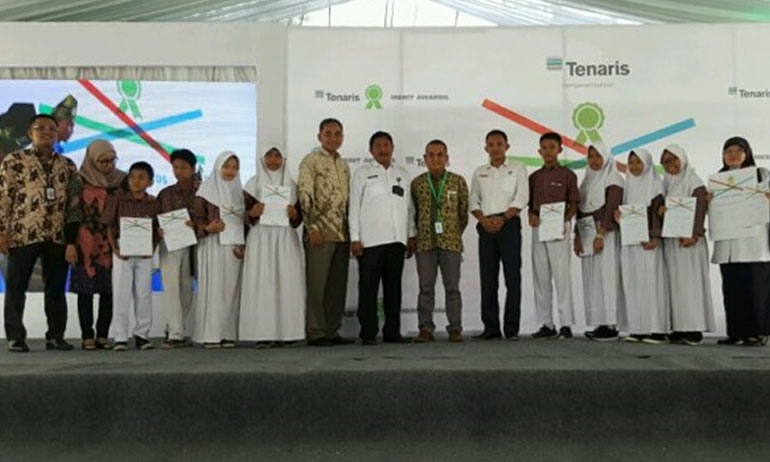 135 outstanding students from nine schools in Cilegon received the Merit Awards, namely educational scholarships from Tenaris SPIJ (PT Seamless Pipe Indonesia Jaya), tube pipe suppliers for the gas, oil and automotive industries on Wednesday (30/1 / 2019).
The awarding of scholarships with a total value of Rp.414 million was symbolically received by students from 3 junior high schools, 3 high schools and 3 selected Vocational High Schools which were centered at SMK Negeri 3 Kota Cilegon.
"This is our fifth program in Cilegon, and eighth in Indonesia. The results of our collaboration with the Cilegon Education Office are based on the ranking of student education achievements and school achievements, "said Director of Procurement of Indonesian Tenaris Goods and Services, Tomy Yanuar in his speech.
Appreciation in the world of education, said Tomy, is a concentration of companies given that education is in line with social investment in addition to increasing student motivation in improving their achievements.
"At the global and domestic level, the Merit Awards also provide scholarships to undergraduate students through Roberto Rocca's education. Outside of education, we also built bridges, bridge of hopes, which have built 81 bridges in Indonesia, "he explained.
In the same place the Head of Development and Staffing at the Cilegon City Education Office, Ismatullah added, students and schools selected in the Merit Awards were those who passed the assessment selection stage based on a number of criteria.
"So the chosen students are not only based on their educational achievements which are taken into consideration, but also those who have achievements but come from poor families. And it is hoped that the existence of this scholarship assistance can ease the burden on his family and they are more empowered, "he said.
While the Head of SMK Negeri 1 Cilegon, Widodo appreciated the assistance. However, he hopes that the company will also pay attention to the continuity of the education of other students at the vocational school with nine packages of expertise.
"There are 18 of our students who have received scholarships, while we have around 1,700 students. Our hope is that the company can also pay attention to our other students. Because we know that this SMK has never escaped the role of industry, including the opportunity for a one-year field practice for the four-year education class in our school, "he said. (dev / red)