I Segreti di Arlecchino (The Secrets of Harlequin) 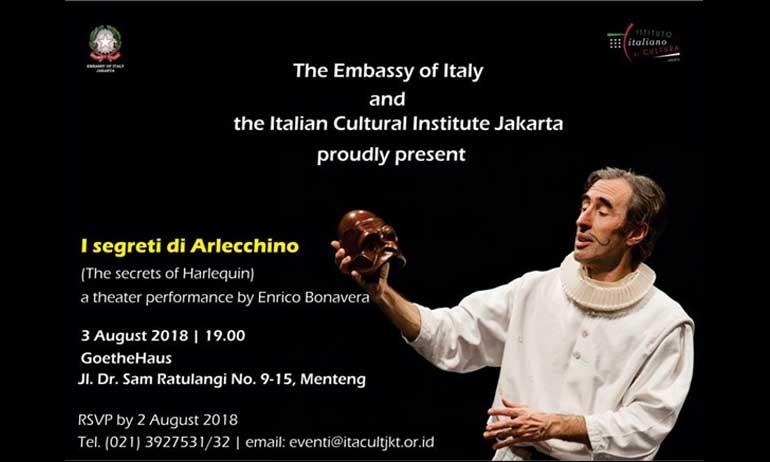 Enrico Bonavera is one of the most important interpreters in the character of Harlequin – the icon of Italian Commedia dell’Arte - in the world. Commedia dell'arte was an early form of professional theatre, originating from Italy. It was the most successful form of popular performance in Europe from the 16th through the 18th century. Enrico Bonavera was an apprentice of Ferruccio Soleri. He has been performing on stage for more than three decades. Enrico Bonavera is a tutor for the Commedia dell’Arte Academy at Piccolo Teatro in Milan and Shapkin Theatre School in Moscow. He was awarded as awarded Best Supporting Actor at the Borgio Verezzi theatre festival for his Arlecchino in Carlo Goldoni’s “The Venetian Twins” (I due gemelli veneziani). In 2007 he won the ‘Golden Arlequin’ in Mantua – an award previously held by Marcel Marceau, Dario Fo, Ferruccio Soleri, and Carolyn Carlson.

The Embassy of Italy and the Italian Cultural Institute are happy to present one of the masterpieces by Enrico Bonavera "The Secrets of Harlequin” for the first time in Indonesia. “The Secrets of Harlequin” was born almost by chance, with the desire to present the Mask and the Comedy in an unusual way, by combining traditional structured scenes with improvised plot. The actor, Maestro Enrico Bonavera, presents the spectacle with a very simple scenography: a trunk and a chair, yet the spirit of the stage is lit up by the splendid masks of Amleto and Donato Sartori. Maestro Bonavera conducts two theater workshops for students and actors. The workshop gives them possibility to have a profound knowledge of Commedia dell’Arte.